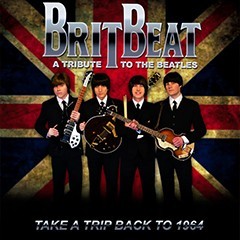 America’s premier tribute to the Beatles! BritBeat is a theatrical recreation concert celebrating the greatest rock and roll group of all time, The Beatles. It is their look, sound, mannerisms, accents, costuming and instrumentation, coupled with the Beatles’ iconic vocal harmonies for the most authentic recreation that you will find. The show is produced to feature a live concert through the ascending Beatles' eras of music including Ed Sullivan, Shea Stadium, Sgt. Pepper and Abbey Road. Along with their award winning multimedia show you will experience the music, the moods and emotions of the 1960s with a stunning backdrop of projected images and video that will immerse you in a fantastic journey back in time and channel you back to the Beatles historic explosion onto the pop culture and music scenes in the turbulent sixties.

BritBeat has been performing to audiences around the world since their beginning in 2001. They have twice headlined at Mandalay Bay in Las Vegas, Nevada, played to a live national television audience for the McDonald’s Thanksgiving Day Parade and performed as the Beatles on the nationally spotlighted 50th Anniversary Ed Sullivan Show recreation on February 9, 2014 in Louisville, Kentucky. Appearing on numerous television stations over the years they have also been featured in Newsweek Magazine and the Beatles 50 Historic Moments magazine. Perennial favorites at the annual Abbey Road on the River Music Festival the band features Chris Getsla as Paul McCartney, Eli Echevarria as John Lennon, Geoff Allen as George Harrison, Dave Robinson as Ringo Starr and Rick Sladek on keyboard orchestrations.

BritBeat is also a performer at the incredible land-based festival, Abbey Road on the River. Check it out here https://www.arotr.com/