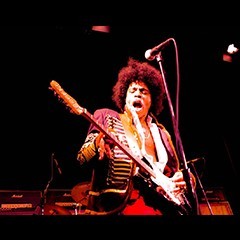 Jimi Hendrix is widely regarded, still to this day as the greatest guitarist of all time, an innovator and a legend gone too soon.

It is the mission and passion of Kiss The Sky - The Re-Experience to keep his memory and music alive.

Rolling Stone Magazine Says: "Yes believe the hype! This show lives up to it!"

Kiss The Sky The Re-Experience: World's Greatest Tribute to Jimi Hendrix is the #1 Hendrix tribute in the world and stars Jimy Bleu the world's longest-running Jimi Hendrix performance artist. Just like Hendrix, Jimy Bleu is a virtuoso, left-handed guitarist and performs all of Hendrix's signature stage moves. He re-creates the iconic sounds and moves of Hendrix so well that he has also been a touring member of Jimi's Hendrix’s own bassist Billy Cox's band. In turn, surviving Hendrix band members Billy Cox, Juma Sultan and Gerardo Velez have all taken the stage with Kiss The Sky.

Kiss The Sky is more than a concert; it is an electrifying sight and sound performance highlighting all phases of Jimi Hendrix’s career. Kiss The Sky's look and sound alike musicians perform in meticulously recreated replica wardrobe and gear historically accurate to Hendrix's most legendary concerts. Audiences are WOWED at the accuracy, including fans that have actually seen Hendrix in concert. Kiss The Sky’s full-length stage show recreates performances of both his band's, The Experience and Band of Gypsys, and features historic video, photos, and the Joshua FX Light Show originally used during Jimi Hendrix's concerts at the famed Fillmore East.

In 2016 Kiss The Sky completed their first USA tour to rave reviews. The tour kicked off with a live TV concert devoted entirely to them and broadcast live to 48 million households on the season finale of the AXS-TV channel show 'The World's Greatest Tribute Bands'. Since then the band has played to capacity audiences at theaters, festivals and famed venues including the 2018 Flower Power Cruise, The Great South Bay Music Festival, Chicago’s Buddy Guy's Legends, in Las Vegas at Vinyl in the Hard Rock Casino in New York at Daryl's House Club (owned by music icon Daryl Hall), Bearsville Theater in Woodstock with special guest Juma Sultan, the Hard Rock Café’s nationwide, World Cafe Live in Philadelphia and their annual Jimi Hendrix birthday celebration at the Cafe Wha? in New York City where Hendrix was discovered.

Billy Cox, Hendrix Bassist and bandmate with Band Of Gypsys:

"Jimy Bleu is the real deal. A Jimi Hendrix aficionado"

"The world knows Jimi Hendrix was in a league of his own and there is no better band that captures the essential Hendrix legacy or a more exact tribute to Jimi than Kiss the Sky! This is my only endorsement of any tribute show and believe me I only give it because I can picture my friend Jimi himself smiling down with approval."

"When it comes to performing Jimi's music, I don't impress easily and there is no question that KTS is the most detailed and historically accurate Jimi tribute show I've seen. Jimy Bleu truly brings the Hendrix spirit to the stage. And that is no small task. They have my full endorsement."

Katie Daryl, Host and producer of AXS-TV show ‘The World’s Greatest Tribute Bands’: "Kiss The Sky is spectacular! So often with tribute bands people say close your eyes, they sound just like them, but with Kiss The Sky you MUST keep your eyes open because the guitar playing, vintage gear, costumes and stage presence of the band is so very precise and out of this world your jaw will drop!"

The Huffington Post's Craig Carpenter says: "They had the effect of recreating songs and feelings the audience has had for years. Exceptionally talented! In the absence of Hendrix himself, the next best thing is to catch this band live!"