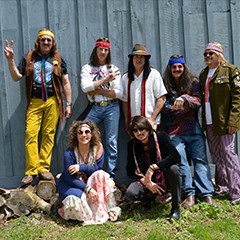 The Songs, the Look,

The Feel of the Woodstock Era

In 2009, Magic Bus founder, Mark Harrington found his love for the Woodstock era music and the incredible artists that were performing during the mid 60’s culture, his inspiration that would spark the vision for Magic Bus, a group of musician, performers that would authentically represent the music of the era and include a colorful, authentic stage performance that would transport people back to a time where those who were there could relive their memories and those who were not could get a vision of what it was like to be there!

Renowned for their live performances replicating the greatest hits of the late 60’s, or Woodstock era, you’ll believe you are watching 30 separate original groups from that era performing their hits! Music by such greats as Janis Joplin, the Who, Jefferson Airplane and Crosby, Stills, Nash and Young and so many more! The Magic Bus show will transport you back to an era of music that represents the age of beads, flower power, headbands, peace signs and the greatest outdoor music festivals of all time! It's nearly impossible not to be singing and dancing by the end of their performance!

The ability to mimic such an eclectic group of artists is lead by Mark Harrington's uncanny ability to impersonate the vocalists who sang so many of these great songs! He truly is a master impressionist with over forty years experience! And when it comes to Janis Joplin, Grace Slick and the rest of the dynamic women of the 60's, NOBODY delivers more authentic, energetic renditions of their music than Melissa Wickson!

Dave Mielke, Dan Medewar and Steve Richards are equally vocally talented and you will hear it in every great song they do!! This group literally has five lead vocalists! Add on the solid foundational drumming of Steve Carie, the great keyboard skills of Mike Bruner (from national recording artists Rare Earth) along with the lighting and special effects produced by Mark Richards and you have a production of epic proportion!

Whether you grew up in the 60’s or wish you did, a Magic Bus concert is not your typical Top 40 song list show, it’s the Top 40 of the late 60’s, a musical and colorful time in history.  Magic Bus not only re-creates the atmosphere of the Woodstock era with their incredible replication of the Woodstock era music selections, but also their authentic stage presentation which consists of members fully costumed to the era.

As one of the few groups in the United States offering a music performance based on the historic Woodstock era, this southeastern Michigan group consists of seven musicians that incorporate in their show guitars, drums, keyboards as well as harmonicas, tambourines and various percussion instruments.  With their incredible instrumental talents, combined with their outstanding vocal ranges, Magic Bus can recreate all of the music that is part of musical history, the Woodstock era, from Canned Heat to the vocals of Crosby, Stills, Nash and Young; Magic Bus is one of the only groups in the USA able to accurately fill this void in musical shows!  It's not surprising that they were voted outstanding tribute group by the Detroit Music Awards in 2018, Best local show by WDIV Detroit, 4 years in a row and best local show by Detroit Magazine 2 years in a row! All accolades well deserved! Once you've seen this show, you'll agree that this group and it's crew take their profession very seriously and it shows! This is entertainment at its best!