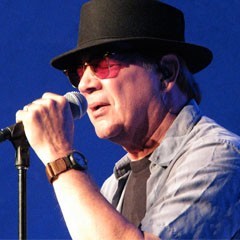 The Rolling Stone Encyclopedia of Rock & Roll holds an esteemed position in the category of numerous encyclopedias dealing with the same subject. Rolling Stone has earned its position because of its dedication to purity, influence, and the defining impact that artist entries included in their encyclopedia have brought to bear on the music we call Rock & Roll.

The artists in this encyclopedia date back to the 1940’s up to the new millennium and hold approximately 1,800 positions. That means that in over sixty years of musical history involving Rock and Roll, we come to an average of 30 artists a year. Mitch Ryder is one of their celebrated artists.

In addition, Rolling Stone Magazine has cited Mitch Ryder as one of the five most influential rock and roll singers to ever come from Detroit and has also published a special collector’s issue entitled, “The Five Hundred Greatest Songs of All Time” which includes Mitch Ryder’s “Devil With the Blue Dress / Good Golly Miss Molly”; which was cut during his short sting with the ever changing back-up group The Detroit Wheels.

The fact that Mitch Ryder only has three gold records does a great disservice to the rich and full history of his musical and literary accomplishments as a writer, performer, singer, and author. Mitch Ryder is not an “oldies” artist from yesteryear, but is a vital and on-going part of America’s and Europe’s continuing definition of creativity at its highest levels.

The year 2012 saw a cross-promoted self-penned autobiography and a new CD. The CD, entitled “The Promise”, was produced by acclaimed Grammy Award winner Don Was and has met with unanimous acclaim and great reviews from press all over the world.

The autobiography entitled, "Devils And Blue Dresses" is continuing to climb upwards having already won a Gold Medal from the IPPY Awards as well as taking 1st place in their Performing Arts category, a 1st place from The Indie Excellence Awards in their Autobiography category, and was a finalist in the Performing Arts category of ForeWord Reviews annual BOTYA. A new CD will also be recorded during the fall of 2016 in Berlin, and will be released during Mitch Ryder’s 2017 European Tour. By the end of 2017 Mitch will have completed a new original musical stage play taken from a novel he has written called " Hide Your Love Away".

With the release of the Berlin CD (title yet to be determined) in 2017, Mitch Ryder’s catalogue will number over thirty-four albums; most of which have never seen the light of day in America.

The list of star performers and artists who credit Mitch Ryder with being an influence on their careers is mind-boggling, from “Medal of Freedom Award” recipient Bruce Springsteen to Johnny Rotten and a very long list in between.

From the New York Times to the Detroit News and Free Press and a million stops in between the early Mitch Ryder is well documented. We want you to become familiar with the exile and post-exile Mitch Ryder so that you may enjoy something new for a change.