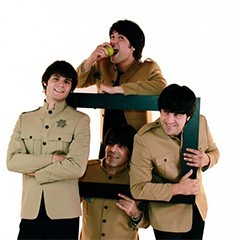 For 15 years "The Jukebox", has been paying tribute to The Fab Four and are considered by many as Latin America's top Beatles Tribute Band and one of the very best in their field. With successful shows all over the world, including amazing performances at Liverpool's historical Cavern Club and Casbah Club, as well as Argentina's Beatleweek and the world-famous Abbey Road on The River Beatles Festival, this band has proven that Beatles music is a universal language. Proof of it is that that they recently have been inducted in Puerto Rico's own Rock n Roll Hall of Fame, along José Feliciano and Carli Muñoz, keyboard player for The Beach Boys (1969-1981)...even performed with ex-Beatles drummer Pete Best!

Their live shows stand out for their faithful and exact rendering of The Beatles’ music. Their versatility is what makes their shows stand out, by recreating the spirit and the magic of The Beatles through the most important element: the music. Note for note recreations of the Beatles most loved songs, from their early hits like "I want To Hold Your Hand" and "Twist and Shout", hidden gems like "Yes It Is" and "Every Little Thing" to their last classics like "Let It Be" and "Hey Jude". Even pre-Beatlemania and solo material, adding up more classic tunes to their 200+ songs repertoire. They are indeed, a "Jukebox" of Beatles music.