John Lodge of the Moody Blues 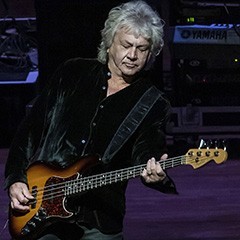 John Lodge, legendary bass player, songwriter and vocalist of The Moody Blues, and recent inductee into the Rock and Roll Hall of Fame, is bringing his incredible ‘Performs Classic Moody Blues Hits and More’ solo tour to the Flower Power Cruise, sailing out of Miami, FL on March 20-27th, 2021. Catch the incredible show that will bring you Classic Moody Blues hits from the ‘Core 7 Albums’, and so much more from a career spanning over 5 decades!

This new “Moody Blues’ John Lodge Performs Classic Moody Blues Hits” set encompasses his incredible hits such as “I’m Just a Singer (in a Rock and Roll Band), “Ride My See-Saw,” “Isn’t Life Strange,” “Steppin’ in a Slide Zone”, and “Gemini Dream”, and then entwines tributes to his friends Ray Thomas and Mike Pinder, with his renditions of “Legend of a Mind” and “Sunset” respectively. The wonderful “Saved by the Music” from Blue Jays also features - a song that will get you up on your feet and singing along! There are also other treats to be revealed on the night, and tributes to other band members, that are sure to surprise and delight fans and music lovers alike.

As ‘Maximum Ink’ wrote of his recent show in Milwaukee, ‘’The audience roared with delight as the entire venue sang in unison with “Ride My See-Saw”, John out in front with his fellow musicians closing out a brilliant night of classics from start to finish.’

And as ‘Beneath a Desert Sky’ said, ‘If you love The Moody Blues music, then you really need to checkout John live. He and the band put on a great show!’

John will also perform songs from his solo album 10,000 Light Years Ago. This album received critical acclaim, and his psychedelic and trippy ‘In My Mind,’ was nominated for “Anthem of the Year” in Prog Mag.

With the Moody Blues on hiatus, this is a unique opportunity to see John perform his Moody Blues’ hits, and, once more, experience the passion and energy of their music. Joining John on stage is his ’10,000 Light Years Band’, and together they capture the spirit and heart of these classic Moody Blues songs. As John says, “I want to keep the Moody Blues music alive’!

This is a not-to-be-missed show full of beautifully crafted songs, great energy and sound, and a fantastic atmosphere that will ‘bring the audience to their feet’, and is a great opportunity to see this ‘rock legend’ and also ‘great guy’ perform in an intimate setting, up close and personal.

If you are new to the music of John Lodge, come and experience this incredible show, and see why his music has influenced musicians and fans for generations. And, of course, if you love the Moodies you will love this show…

During his remarkable 53 years with the Moody Blues, Lodge has sold more than 70 million albums including the groundbreaking ‘Days of Future Passed’, and has composed many of their biggest hits. The album ‘Seventh Sojourn’ was Billboard number 1 for 5 weeks, and Lodge wrote both the singles from this album; the high-energy “I’m Just a Singer (in a Rock and Roll Band)” and the beautiful and ethereal “Isn’t Life Strange”.

John has received numerous awards including being inducted into the Rock and Roll Hall of Fame, Birmingham Walk of Fame, ASCAP (American Society Of Composers & Publishers) and an Ivor Novello for Outstanding Contribution to Music, and he has been voted one of the 10 most influential bass players on the planet.

As a member of The Moody Blues since 1966, John Lodge has spent much of his life touring the world, as part of a 'rock n roll band'. His first solo album titled NATURAL AVENUE was released 40 years ago in 1977. His second solo album, 10,000 LIGHT YEARS AGO was released in 2015, and was followed by a Live Album “Live from Birmingham - The 10,000 Light Years Tour” in 2018. The current tour will support his best of album “B Yond”, featuring 3 new songs and 2 new remixes, together with other songs carefully curated by John from his career, released by BMG on digital, CD and 180g Vinyl. The album features artwork by ROGER DEAN continuing their long relationship that goes back to NATURAL AVENUE.

In John’s words, ‘Music is my life and I can’t wait to get on the road with the 10,000 Light Years Band… I am a ‘Moody Blue’, I always will be, and the fans and I have travelled this road a long time so I hope they will continue with me as we keep the Moody Blues music alive. And I hope new fans will discover and explore along with us as we go B Yond’