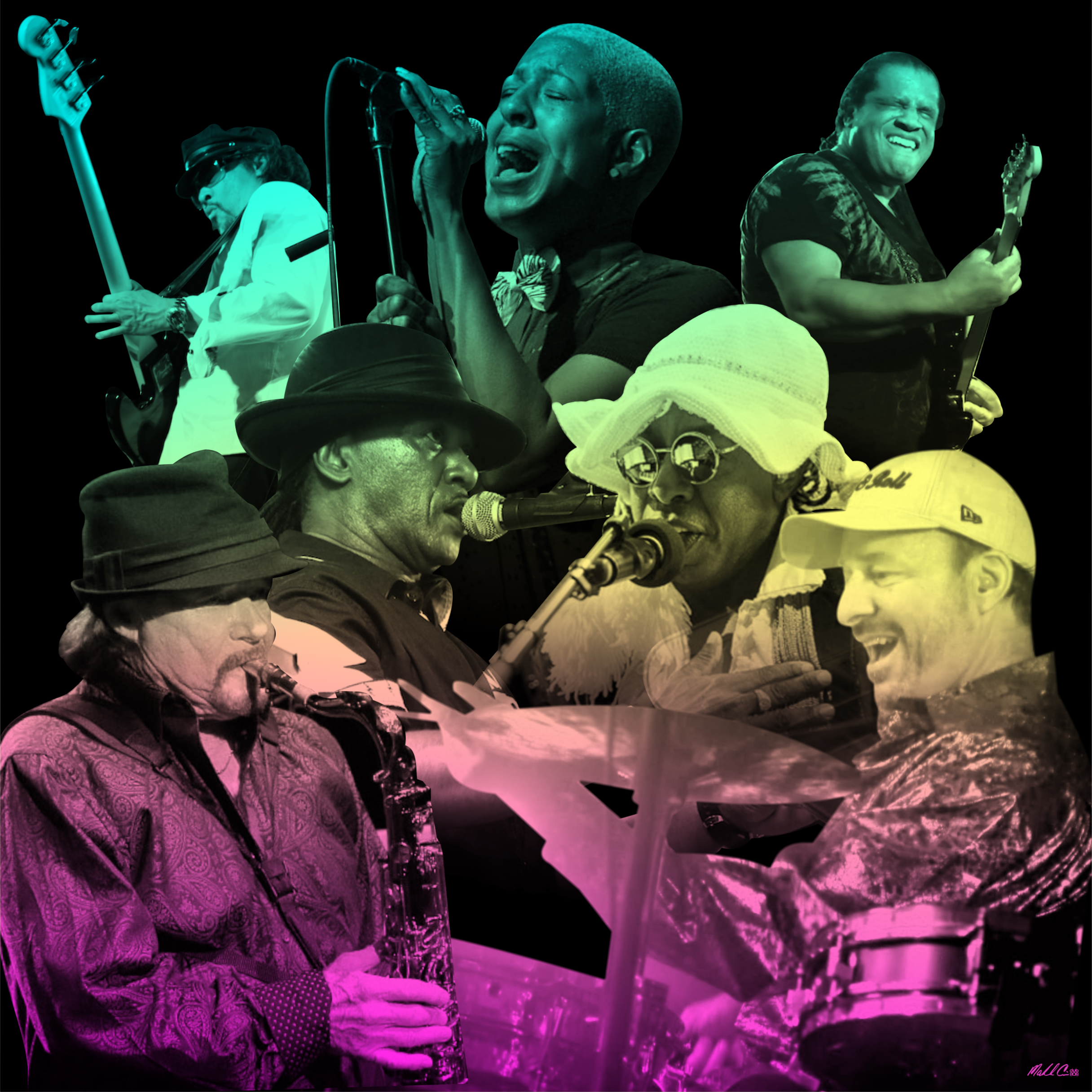 Some claim to have been there, some wish they’d been there, but Jerry Martini was actually there: San Francisco, 1967. And that was when and where Sylvester Stewart assembled Sly and the Family Stone. It took a lot to stand out back then, but the Family Stone most definitely stood out. Their appearance, their racial make-up, their gender make-up, and–above all–their music.  And on the Flower Power Cruise you’ll hear the hits, “Dance to the Music,” “Everyday People,” “Stand,” “I Want to Take You Higher,” “Hot Fun in the Summertime,” “Thank You (Falettinme Be Mice Elf Agin),” “Family Affair,” “If You Want Me to Stay,” and many more. The Family Stone knows how to play them because some of them were in Sly’s original Family Stone and some grew up with those who were there. It’s all in the Family.

If you look at the audience at today’s big festivals like Coachella and Bonnaroo, you’ll see kids in their twenties looking like they’re on their way to a Vietnam protest rally. Why do you think the music and culture of the Sixties holds such a powerful attraction for subsequent generations?

Jerry: That era really made it clear what it was to be a young person. Standing out by being rebellious. There was so much unrest then, more even than today. The music and the culture spoke to that. Listen to our song “Stand.” Really listen to it! “You've been sitting much too long/There's a permanent crease in your right and wrong/Stand! There's a midget standing tall/And a giant beside him about to fall.” Every verse is as good as that and they were all saying, “Stand up for yourself. Stand up for your rights.” No one else had said it like that before. It’s still relevant.

You were originally from Denver. How did you end up in San Francisco?

Jerry: I was only from Denver if you read Wikipedia. They got my birthdate wrong, too. I was actually born in Shamrock Mine, Colorado in 1942, not ’43. When I was two, we moved to San Francisco so my dad could join the Navy. If he hadn’t done that, who knows what would have happened to me and my life?

San Francisco was always a little different going back to the beatnik culture and the jazz scene in the Fifties. What was your experience of San Francisco in the Sixties?

Jerry: I went to high school in the Twin Peaks district. I came from a middle class family. Then I went to visit Oak Street and Haight-Ashbury and it was mind-blowing. A whole different culture was appearing I’d never seen before. To tell you the truth, though, I was more tuned into the older scene in North Beach. The beatniks and the Beats. Walk down Broadway in San Francisco then, and you’d see Beat poets rapping their poems and playing bongos. Someone playing flute. It was Rap before Rap. For me, the scene in the Fifties was the beginning of it all.

Jerry: We were both teenagers. He was a few months younger than me. We ran into each other. I knew then, and I’m still sure of it, Sly was a genius. So brilliant, so ahead of his time. He loved Bob Dylan at a time when black people liked black music and white people only listened to white music. He put the band together deliberately to challenge that. Black and white, male and female, no one was in the background. He was a man of true vision. Sometimes geniuses find it hard to live up to what they’ve done earlier. I tell everyone who wants me to say something bad about Sly, it doesn’t matter what he’s doing now. He made his statement. He gave his gift to the culture.

Sly knew the business from the ground up as a producer and dee-jay. Did he consciously set out to create a multi-racial band, or was he subconsciously channeling the vibe of the time?

Jerry: He wasn’t channeling. It wasn’t subconscious. It was all very deliberate. We’d stay up all hours and talk about it all the time. Sly knew exactly what he was doing. His songwriting reflected his vision. Check out those lyrics. He was so far ahead of his time. We were all hand-picked for a reason, and Sly knew the reason.

It has been written that you and Sly’s drummer, Greg Errico, were hassled by the Black Panthers because they thought Sly’s band should be all African American.

Jerry: They wanted to kick our butts a time or two. It was no big deal, really. Sly stood up for us, and saved us from physical harm. When we started, there were black venues and white venues. As time went on, the audiences blended. Everyone just came to hear the music.

The Family Stone’s outfits were pretty far-out even by the standards of the time. A long way from Motown’s matching uniforms. Was that intentional or just rolling with the vibe of the time?

Jerry: It looked random, but again Sly pretty much planned it all. There’s a publicity photo where I look like a cave man in cow hide. He had a cow skin rug in his house. He took out a razor, sliced it up, and gave it to me to wear. “Here’s your outfit.” It was damn hot, too!

“Different strokes for different folks.” Was that a saying that Sly borrowed or one that he or someone in the band came up with?

Jerry: You could be talking to Sly and you’d make a chance remark and he’d jot it down. I called him a word vampire. Where you’d hear a phrase, he’d hear a hook for a song. “Thank you for letting me be myself again” was something I said to him. I remember someone saying “Better thee than me,” and Sly jotted it down, and then it was a song.

You were at another mythic place and time, the Woodstock festival. Is there one memory above all others from that show?

Jerry: It was a mess. A total mess. We had to wait six hours to go on. It was three in the morning before we got out there. After every act, they’d have to tear down and set up. Took forever. By the time we got out on-stage, people were in sleeping bags. But we got ‘em up. Something happened between us and that audience. Half a million people or however many it was, they were just totally into what we were doing. That’s a feeling you couldn’t scrape off you. It was Love City.

Did you have any idea that Woodstock would be WOODSTOCK?

Jerry: No one did.

I know it’s picking a favorite child, but is there one record you worked on that you love more than any other?

Jerry: “Thank You (Falettinme Be Mice Elf Agin).” It’s just one chord. The groove is unbelievable. Lots of people do it, and they either do it too fast or too slow. Hardly anyone finds that groove. We always close the show with it.

Prince drew heavily on Sly’s music. You and Sly’s original trumpet player, Cynthia Robinson, worked with Prince, and his death must have hit you hard.

Jerry: Did it ever. I’ve heard so many untruths about him since his death, too. Sly’s original bass player, Larry Graham, was Prince’s idol, and he came to us, and we worked with him from 1997 to 2000. Another super happening in my life. We did a forty-five minute Sly set in the middle of Prince’s show, and we did a big New Year’s Eve TV show in 2000. After playing three years with Prince, I knew people still wanted to hear us, so I said to Cynthia, “Let’s put the Family Stone back together.” We got Greg Errico, and Alex Davis, who sings just like young Sly, and Phunne Stone who’s the daughter of Sly and Cynthia Robinson.

As you know, we lost Cynthia. She died in November 2015. She’s irreplaceable, but we have Jimmy McKinney playing trumpet, and he’s played with Larry Graham so he’s family.

Jerry: Pretty much what you’d expect. Stay away from hard drugs. Look at who it ruined. I’ll be seventy-four this year, and I’m proud to say that I never worked a day in my life because I always did what I loved. What else? Listen to your own soul. Be a leader, not a lamb.

Did you enjoy the first Flower Power Cruise?

Jerry: Loved it. I’m so glad they invited us back. I think we fed off the audience and torched it the first time around. We’ll do it again!