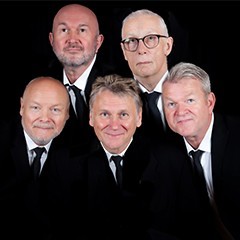 In the early sixties, Gerry and the Pacemakers worked the same Liverpool/Hamburg circuit as the Beatles and many other groups before being signed in 1962 by manager Brian Epstein, as his second group after the Beatles.

The following year, under the direction of producer George Martin, they burst on the scene with three consecutive No.1 hits –“How Do You Do It”, “I Like It” and “You’ll Never Walk Alone” – proving themselves serious competitors to the Beatles.

Over the next few years, most of the Pacemakers hits were actually written by Gerry, including “It’s All Right”, “I’m the One”, “Don’t Let The Sun Catch You Cryin” “Ferry Cross the Mersey”(also the name of a film in which the group starred). “Girl On A Swing” and many more.

On retiring, Gerry asked that his music be kept alive and that The Pacemakers should continue touring. Two new members joined the band and under Gerry’s musical director, Tony Young, the band remains one of the busiest touring bands around.