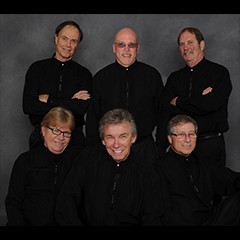 The Classics IV, one of the most popular and influential pop groups of the 60s and 70s, originated in Jacksonville, Florida. They achieved phenomenal success with hits “Spooky,” “Stormy,” “Traces,” and Everyday With You Girl, all of which sold well over a million copies and were awarded gold and platinum discs by the Recording Industry of America. All four hits appeared in the 1977 film “The Chicken Chronicles” in addition to various other movie soundtracks including the hit HBO Series “Six Feet Under:

By the 1970s The Classics IV accumulated a total of 16 Billboard chart hits, solidifying them as a hit making pop group and crediting The Classics IV with the development of “Southern Soft Rock.” To date The Classics IV have recorded 17 albums including “Spooky,” “Lil Bit of Gold” “Traces” and “Golden Greats.” In 1993 The Classics IV were inducted into The Georgia Music Hall of Fame.

The Classics IV popularity is stronger than ever performing in a variety of venues to rave revues and receiving back-to-back invitations to join hugely popular Happy Together Tour. The group continues captivating audiences with their professionalism, good humor, and ingratiating personalities. In 2011 The Classics IV returned to the studio with the release their album, “A New Horizon,” blending the old with the new. 2015 saw the first-ever “Live Album” with the release of “One Stormy Night – The Classics IV Live At The Ritz” and in 2020 the group received great revues and airplay with the first-ever Christmas release “All I want For Christmas Is You”.